Wivelsfield Hall, sited just outside the village of Wivelsfield Green, was the family home where I spent the latter part of my childhood, and in which my parents lived for many years. This picture (left) shows the view over the front lawns from the driveway, and the large stained glass window that allowed light into the main hall. The tree in the foreground is a Mulberry (the leaves of which are eaten by silkworms!), planted by my father when we first arrived, and notoriously slow-growing.

This picture (right) shows the main entrance to the Hall. The rounded tower to the left contains a ground-floor room which was at one time the library, and the bedroom immediately above it was occupied by myself for many years. Note the large gravel turning circle in front of the door.

This picture (left) shows the main hall and stairway inside Wivelsfield Hall, at Christmas time. The stained glass window over the fireplace is decorated with the motif of bees. Getting that huge Christmas tree inside through the front door was quite a challenge! 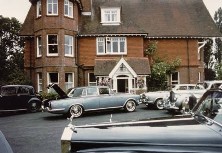 My father (Derek Bryan Hopkins) was for many years an enthusiastic member of the Rolls Royce Enthusiasts' Club (RREC). This picture (right) shows an RREC rally at Wivelsfield Hall, hosted by my father, with cars drawn up on the turning circle and along the drive. He did, of course, have a Rolls Royce of his own - although it is not shown in this picture.

More recollections on life at Wivelsfield Hall can be found in chapter 15 of my father's autobiography To Stroke a Cheetah.

This book also contains numerous anecdotes and stories from my father's life as a pilot and from his later life.

Home Page | Home and Family | To Stroke a Cheetah